The Medium is the Massage 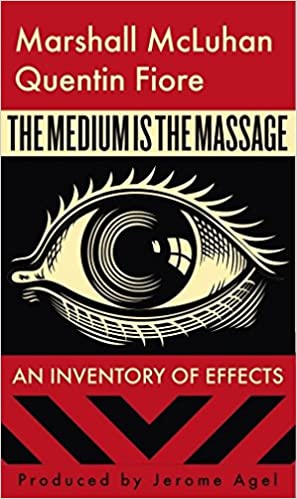 The Medium Is the Massage by Marshall McLuhan

30 years after its publication Marshall McLuhan’s The Medium is the Massage remains his most entertaining, provocative and piquant book.

With every technological and social advancement, McLuhan’s proclamation that “the media work us over completely” becomes more evident and plain. In his words, so pervasive are they in their personal, political, economic, aesthetic, psychological, moral, ethical and social consequences that they leave no part of us untouched, unaffected, or unaltered.

McLuhan suggests modern audiences enjoy MainStream media as soothing, enjoyable, and relaxing; however, the pleasure we find in the MainStream media is deceiving, because/as/since the changes between society and technology are incongruent, perpetuating an Age of Anxiety.

McLuhan’s remarkable observation that “societies have always been shaped more by the nature of the media by which men communicate than by the content of the communication” is undoubtedly more relevant today than ever before. With the rise of the internet and the explosion of the digital revolution there has never been a better time to revisit Marshall McLuhan.

McLuhan describes his own thesis on the final page, quite succinctly:

“The environment that humans create become our medium for defining our role in it. The invention of type created linear, or sequential, thought, separating thought from action. Now, with TV and folk singing, thought and action are closer and social involvement is greater. We again live in a village.”

In my own words, McLuhan is saying that the content of any given media matters less than the structure of how that content is conveyed. Books beget linear thought. Social media begets political debates and name-calling. The rules of the environment (the medium) dictate how we interact with it. And we’re surrounded by it constantly, always in it, and mostly unaware of how invisible yet all-powerful its influence is.

The format of the book is intentional to make known the message of the book. Because it’s written and designed to read more like a piece of philosophy or art or poetry, I am as a reader predisposed to read its thoughts as such.

If it were formatted like a proper textbook or researched nonfiction essay, I would be underlining things all over the place with notes like “source???” and “please provide evidence!”

That is to say, because of the way the same information is presented, I am inclined to think about and process it differently. Because it is formatted like poetry, I critically read into the ideas instead of the substance of claims.

People in the world of tabletop RPGs, especially indie games, like to discuss the way in which game mechanics interplay with story elements to create the overall effect.

It’s generally accepted that the mechanics of a game will shape the narrative it creates. That’s why people get annoyed when others insist on applying the ruleset of D&D to any narrative. In essence, if you have game mechanics that focus on fighting and combat, your story will wind up with fighting and combat. If your game mechanics focus on emotional trauma and interpersonal healing, you and your players will wind up telling narratives that center emotional trauma and interpersonal healing.

This is exactly McLuhan’s point - the medium is the message. The mechanics shape the message and are intrinsically tied to how the story plays out. And awareness of these is what lets us shape the stories and discover how the mechanics and our own ideas shape the system: “there is absolutely no inevitability as long as there is a willingness to contemplate what is happening.”

Language as a medium

This reminds me of how language shapes how we think.

“When faced with a totally new situation, we tend always to attach ourselves to the objects, to the flavor of the most recent past. We look at the present through a rear-view mirror. We march backwards into the future.”

“In the name of “progress,” our official culture is striving to force the new media to do the work of the old.”

This of course immediately made me think of the pandemic, remote working, zoom, and the immediate desire to force technology to replicate in-person-ness instead of imagining beyond in-person interaction. Forcing new media to do the work of the old.

Wild to think that McLuhan’s ideas about environment here are likely the source of what (to me) is now common knowledge, as popularized by 99% Invisible and discussed in Extrastatecraft.

He also goes into pre-conceived bias:

“The professional tends to classify and specialize, to accept uncritically the groundrules of the environment … The “expert” is the man who stays put.”

Reminds me a lot of the value of “fresh eyes” on a codebase.

Something about this is fascinating to me:

“Where a visual space is an organized continuum of a uniform connected kind, the ear world is a world of simultaneous relationships.”

McLuhan then gets into how “most people fund it difficult to understand purely verbal concepts” (like me!) and the way in which we trust vision and the eye and visual metaphors more. Fascinating! Organizing information visually certainly applies a certain, different medium to it.

There’s a comparison here to the The Shallows, because there, the author distinguishes the hyperlink structure of the internet with webbed, networked, nonlinear thought patterns from the linear, line-by-line thought patterns presented in a book.

McLuhan takes this idea one step further to say that the book is just applying linear thought patterns onto this third form, the auditory, which is chaotic and all-at-once but also, in my opinion, the most linear medium of all because its linearity is defined by the passage of time itself.

“The public, in the sense of a great consensus of separate and distinct viewpoints, is finished. Today, the mass audience (the successor to the “public”) can be used as a creative, participating force. It is, instead, merely given packages of passive entertainment.”

To me, this is referencing the passivity of the way that we interact with media. In McLuhan’s 1960s world, the passivity of packaged entertainment was about TV. Today, it can be expanded to some much more. And contrasted with the “creator economy” of the internet. Creator, consumer, viewer, maker - to what extent are these separate and distinct viewpoints? Are we a public? Are we a great consensus? Or are we a mass audience, everyone (even “creators”) just consumers of the Internet as media?

I think this is the line that people use to credit McLuhan with predicting the Internet and how it would be used.

“Information pours upon us, instantaneously and continuously. As soon as information is acquired, it is very rapidly replaced by still newer information. Our electronically-configured world has forced us to move from the habit of data classification to the mode of pattern recognition. We can no longer build serially, block-by-block, step-by-step, because instant communication insures that all factors of the environment and of experience co-exist in a state of active interplay.”

This is the global village, a “simultaneous happening”. Again, not surprisingly since Nicholas Carr references this book so much, this reckons back to The Shallows and its thesis that the Internet is changing our brains. McLuhan saw this even before the Internet.

The title is of course supposed to be “The Medium is the Message” but the typesetting as “Massage” was a mistake that they wound up keeping. There’s also the “message” -> “mess age” pun that becomes “massage” -> “mass age”, which references McLuhan’s global village.

In the end, everyone’s individual world - your context, your thoughts, your experiences and biases, are the ultimate medium because they shape the way you receive and process the information content of the world.